The Place that makes them great.

Hailed as a “gift of the gods” by the Greek poet Homer in The Odyssey, the venerable pear has graced diverse civilizations for more than 4,000 years. Today, the U.S. is the third largest pear producing country in the world, and the orchards of Oregon and Washington in particular allow this old-world delight to flourish to perfection in their pastoral terrain.

There are four principle growing regions in Washington and Oregon. 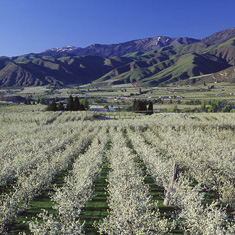 Wenatchee – This region is identified by the city of Wenatchee, located in the North Central Washington growing district. Named for the “Wenatchi,” a Native American tribe from the region, the word is believed to mean “river flowing through canyons,” a fitting description of the turbulent rapids of the Wenatchee River that tumbles through the surrounding canyons.

Yakima – According to Native American tradition, the word Yakima means “Black Bear” and/or “People of the narrow river.” Each year the plentiful water and rich, light, fertile soil of the beautiful Yakima Valley brings thousands of acres of USA Pear trees into bloom.

Mid-Columbia – The Columbia River flows through the Columbia Gorge as it passes through the Mid-Columbia region. This rich growing region stretches from White Salmon, Washington south to Hood River, Oregon. Here, thousands of acres of USA Pears flourish under the protective vigil of the snowcapped peaks of Mt. Adams in Washington, and Mt. Hood in Oregon.

Medford – Southern Oregon’s Rogue Valley is as rich in lush, USA Pear orchards as the surrounding area is rich in history. The area around Medford and the neighboring town of Jacksonville, a designated National Historic Landmark, serves as a time capsule dating from Oregon’s early pioneering days.

Ensuring sustainability for generations to come.

Not all pear orchards are cultivated alike. The traditional method of planting trees in evenly spaced orchard rows is still the most common, but new techniques are employed to enhance acreage production and yields. Among these is a trellis system, where pear trees are trained across a large trellis much like grapes. Another version of this technique is the V-trellis, which allows trees to grow at two diverging angles. The advantages of these new systems are that they increase tree density, while at the same time maximizing light exposure into the tree to help fruit productivity.